My Review of Edge of Tomorrow for What She Said! Sirius XM Radio Blog


Edge of Tomorrow
Directed by Doug Liman
Starring Tom Cruise, Emily Blunt
Country: USA
Language: English
Based on manga and novel “All you need is kill” by Hiroshi Sakurazaka
Rating: 4/5 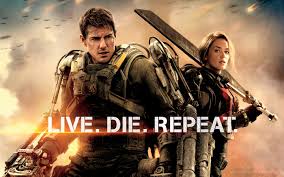 Tom Cruise has found a worthy vehicle for his return to form as an extraordinary man whose courage and strength is pitted against extraordinary events. Not only is Edge of Tomorrow well made, poetic and mad, it’s as exhilarating as any sci fi actioner and bonus – it’s intellectually challenging. It has a human heart stranded on an inhumane wrecked planet under siege by aliens and a “real” as opposed to synthetic, base.
Cruise is the arrogant Major William Cage, a “hands off” career military man whose behind-the-scenes job has never demanded he actually fight. But times are tough and General Brigham orders him onto the battlefield. Cage protests that he’s not a real soldier; his panic and fear is palpable, he’s sweating hard. He’s a coward. But he has no choice and is sent to the barracks to join the dodgy Squadron J. They are sent into battle and Cage is killed within moments.
He awakens to find himself reliving the last few hours, waking up on a heap of bags, handcuffed and forced into the barracks on onto the live battlefield. Again he is killed by the aliens, reawakens to start again and again, each time, staying longer in the time loop to learn and prevent mistakes and hone the body and mind for victory.
The leading human in the war against the aliens is a female, the Angel of Verdun (Blunt); she is the warrior non plus ultra, the mightiest, most intelligent and independent vigilante. She knows that Cage is stuck in a time loop after being splattered with alien blood. She knows because she suffered the same fate.
The film is about the inhumanity of war, the scourging of the environment, our many fears in this day and age and other things but first and foremost it is about transformation. Cage was transformed, something he never wanted but couldn’t refuse and was a necessary part of the machinery that served the greater good. From whimpering private to Killer Cage, it’s an epic story with elements of Greek myth about it.
Its visual universe has a strange brutal ugliness that tips into beauty, a complete, edgy and consistent world of ruin, cement and steel and harsh landscapes. It tells the sad story of earth after the aliens attack and the destruction they’ve caused and after we got through with it.
The beauty is in its bravery in daring to exist despite its wounds. Director Doug Liman’s amazing eye and vision, seen earlier in the Bourne films delivers once again and the result is nothing short of riveting. The art direction offers an austere new brutalism, formed with structural materials like undressed concrete, unconcealed service pipes and electrical systems, and abandoned things like cars, helicopter, jets and weapons that the ever more capable Cage is learning to operate. It’s a fully realized world.
The aliens are inventively scary and cute at the same time, they suggest those cute lizards with the fanned heads, and yowling cats and adorable squids, but are still plenty scary. They have “personality” and I’d like to see them in friendlier roles. I’m serious.
Posted by Unknown at 6:52 AM