Agatha Raisin is a light hearted British comedy series in the vein of Agatha Christie character Miss Marple as played by Margaret Rutherford.  It’s bouncy, funny and terrific light entertainment, but of course, it follows the career of an amateur sleuth with a gift for solving murder mysteries, so it has its dark moments. 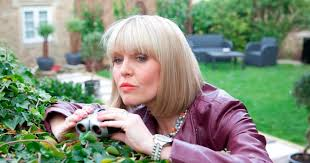 
The answer lies in a tiny village in the Cotswolds, where she spent her childhood summer vacations. She’s idealised it and decides that’s where she wants to be.  She buys a gorgeous thatched roof estate but immediately offends her neighbours. Raisin in unable to drop her London power chick attitude and sarcasm, and she soon rubs the rest of the villagers the wrong way. 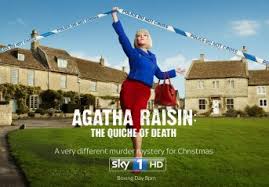 But when the local womaniser is murdered, her interest is sharp and sudden and a new interest and skill reveal themselves - sleuthing.  Her natural curiosity and insight into human behaviour provided by her PR clients over twenty years are aroused.  She then commandeers her two gay, outré besties in from London to help, and they dive in wholeheartedly. Good times. 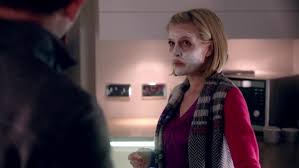 Jensen’s appealing Miss Marple redux harks back to the days of fun crime solving of the Rutherford era. Subsequent Marple efforts have generally taken a grim turn and the heroines aren’t remotely funny.  But Jensen brings shades of Absolutely Fabulous as a boozy, wisecracking, short tempered and absurdly dressed middle aged woman, except she has skills, and a renewed sense of vigour to a dusty old franchise.


The series is based on the books by M.C. Beaton.