whatshesaid167September 12, 2014current affairs, What She Said 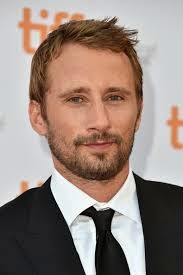 Belgian actor Matthias Schoenaerts' American launch in The Drop puts him squarely into Bad Boy territory.  He plays a petty neighbourhood criminal with Tom Hardy as a bartender and Noomi Rapace as the woman he loves but cant have.  He claims a murder as his own to impress her.  As we found during a conversation at the Toronto International Film Festival, where two of his films appear, he's very good at being bad but he has an exit plan.

Starting with The Drop,  your character Eric lives in this world of criminals in Brooklyn.  He looks to build his cred by taking credit for crimes he didn’t commit.  He’s a fraud.
What was most important to me besides that was we should really feel that he still loves Nadia (Rapace) more than anything in the world and that fuels his actions. That to me was the core of what his soul is. The love he feels. It shows and brutal ways but in the end its still love he feels for that woman. (When the director asked me to read the script) I thought “Yes, there’s meat on the bone”. Mostly when you’re playing a supporting character there’s not much to it or you’re a red herring or you have to give the passes for someone else to make the goal, but I felt there was a dimension that could be brought and he could have some depth. That was an interesting challenge. 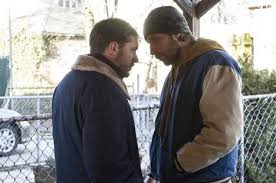 Tom Hardy and Matthias Schoenaerts in The Drop You got the Brooklyn accent right. You nailed it. It was interesting to have that very specific American idiom and have all these international people playing in it like Rapace, Hardy and the director.
I was just working on it, training, training, and training and before you know it, your body absorbs it and you don’t have to think about it anymore.
So many international stars in The Drop and yet its set in quintessentially American milieu, lower class Brooklyn.  Does the film have a European sensibility as a result?
We really took time for character development which is not always the case in the U.S. and I’m choosing my words carefully. Other than that, I don’t know. Its suggests that we’re different culture and think and feel differently but in the end it’s the same thing, people and their hearts and souls in life in context. I wish I had a ready-made answer. It was interesting to see how the director would work with this opportunity and incorporate this universe he’s part of now and filmmaking. It’s a different ball game. If you want your character to wear red shoes you're going to have to talk to fifteen people and defend that choice why you're wearing red shoes. That’s a weird thing isn’t it? Whether the character has a beard or not, you have to ask fifteen people. In Belgium, you say “That’s my character” and Michaël goes “Fine, go ahead”. And that’s the end do the story. This is a minor example but it translates to all the aspects of filmmaking here. It was surprising and exhausting. It wasn’t a drag but it wasn’t always easy.
Do you have any problems being typecast? You play a bad guy fairly often.
To some extent that pisses me off, my characters are all different. If you don’t see that these people are different on any f**king level then you don’t see the work I’m doing, and consider the heart and soul I bring to it. I said you’d better back it up with a consistent vision. Is Ali a bad guy hell, no. Is Jackie a bad guy? No. I don’t see it. Love interests? There are so many. What does that cover, the bad guy or the love interest? There are so many universes within that box, and that’s the thing, I never look at my characters as being one thing. I don’t understand “bad guy” because that’s not how I conceive them. That’s their function in the film but that’s not how I look and embody them. I look for something human and honest and sincere. I like to portray broken souls and wounded animals, that’s what I see in the world around em, we all are broken souls and yes, I like to play or defend people who don’t have the ability to defend themselves. To give a voice to people who are voiceless, that’s what I love. I don’t want to call myself an artist but as an artist, it’s important to defend that. Next year I play a shepherd. In A Little Chaos I play a gardener in the times of Louis XIV.
Alan Rickman directed you in A Little Chaos. How was that?
He is one of a kind actor and beautiful person. It’s the first time I have been directed by an actor and that’s quite something. You're being directed by an actor you appreciate and you know you will listen. I will listen and I will believe you and you have to be your own, and find it. He’s the sweetest man.
Posted by Unknown at 4:05 PM